I and others have come to the conclusion that the key to successful and safe DIY spoke sealing is using a rim with the safety lips (right). These rims are stamped ‘MT’ as opposed to ‘WM’. 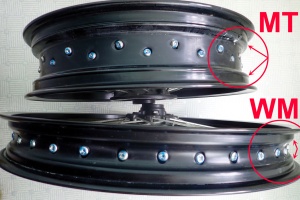 L o n g e r  explanation
All cast tubeless wheels have these lips, and just about all rear spoked, tube-type rims have them too, right as far back as IVJ Teneres from the mid-80s. These humps/ridges/lips keep a tyre’s bead seated on the rim and out of the well (but make tyre changing harder).
However, stock 21-inch tube-type spoke rims hardly ever have them. I don’t know why as having a flat tyre come off the rim is more perilous than on the rear. So with a typical 18/21 spoked bike, like my AT, DIY-ing the stock lipped back wheel is easy and safe. But the front requires tracking down a lipped 21. Giant and Takasako Excel (above right) make them from about £110 but you won’t find ebay flooded with them. Once you have laced that rim on you can try and DIY seal it too, or you can spend from £120 on a BARTubeless or Airtight professional sealing. 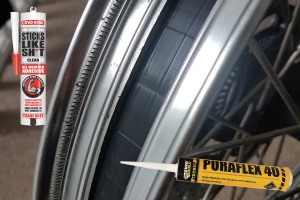 PU sealants
Way back in 2008 I bought the new XT660Z Tenere for a research trip in Morocco. I asked on Horizons if sealing the well of the spoked rims to make them tubeless (as above) was a good idea. The discussion concluded it was do-able and had been done. I like to experiment

with new ways of doing things, so I went ahead. Full DIY XT660Z article here. Short version: the stuff I used (right) didn’t adhere that well, plus I didn’t do a good enough job in preparing the rim: and then on the road, I forgot all about it, tyre pressures dropped after 1500km and I dinged a rim and lost the seal.

Above: over a decade later Ian C tells me he once had good results on his KTM V-twin with Ever Build Puraflex 40 PU sealant; about £6 for 310ml. This was after thoroughly degreasing and then spraying etch primer (left) on the wheel before applying a couple of layers of black Puraflex and screeding it down smoothly.
Cyb’s DIY procedure listed on the index page does it another way: carefully sealing each nipple with two types of sealant but not covering them in an 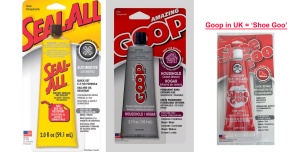 overall band or even a tape. There’s much to be said to this: individual leaks can be more easily pinpointed and fixed. He recommends specific glues: which he seems to have researched rather than hoped for the best. First, two applications of runny Seal-All on each spoke nipple (see below). Runny – even like SuperGlue – is the key so it will seep

down into the nipples’ thread and along the outer collar. Don’t forget there’s a curved spoke washer (right) between the spoke nipple and the rim, so that’s an extra leakage surface to seal. Then, once cured, each nipple is capped with a thicker blob of Goop from the same manufacturer, Eclectic Products in Oregon.
In the

UK these exact products are hard to find or

are expensive if bought from the US where Seal-All is just a couple of dollars. I found Goop for a tenner. There must be something identical here to Seal-All – is it so different from the Bostik 1782 I have in the desk drawer? I put a test blob of 1782 on a rim to see if it would peel off easily. It didn’t so I’ll use it on my Africa Twin’s back rim, then cap with the Goop. Others have used plain old Silicone sealant. Something that’s designed for tent seam sealing (Seam Grip, Seam Seal) will be runny enough. Another good thing with Seal-All and Goop (and 1782) is they’re clear so you can see any too-big bubbles or lifting. They definitely look better than the creamy texture of the 3M 5300 mastic I tried years ago.
The good thing is tyre pressure pushes these tapes and

sealants into the rim, so improving the seal. But if you inject water-soluble Slime instant puncture sealant (right), that may not take to your sealants. As it is, water can seep down a spoke collar from the outside and get under your sealant. If you’re doing wet trip, like Siberia, there’s something to be said from sealing the nipple/rim/spoke contact area from the outside too. Just a smear of whatever you got ought to do. 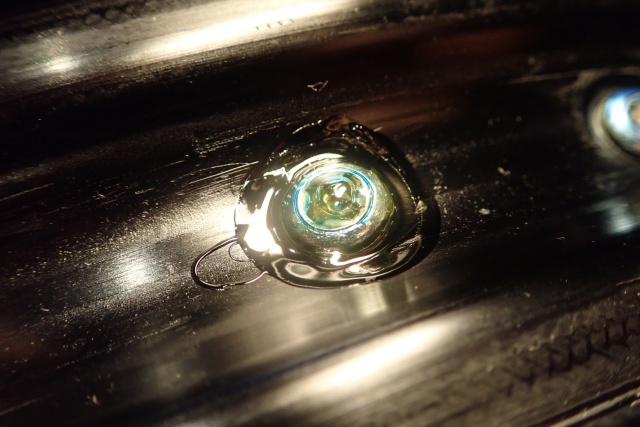 Glass sealant DIY
Another DIY suggestion is using glass sealant, again, being meticulous with your pre-cleaning and patient with your sealant curing – see below. Sounds similar to Cyb’s process.

• Clean the wheels with the degreaser/cleaner, wash with water to make sure that any chemical is washed off. Wait for a day in dry in a clean environment. Use a blast of air if indeed.
• Apply the sealant to each spoke nipple, wait for a day to cure, apply another layer, wait again.
• Apply sealant to the inner part of the wheel. One layer for one day, do it twice then wait until it’s completely cured.
• Fit the rim band (or tape, see below). 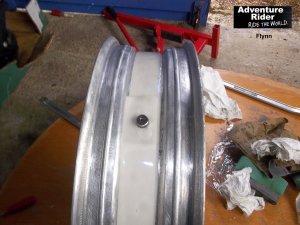 Builders’ Sealing Tapes
One guy told me he simply taped up his rims with duct tape and topped up his tyres once a week. Using something more airtight might even enable a proper job. I’ve seen 3M 4411 Extreme Sealing Tape mentioned (right; technical sheet). In neutral (N), grey (G) or black (B), it’s 1mm thick (more pliable than the 2mm 4412N) and comes in 50mm width for big bike rims, or 38mm (1.5 inches; product code: BLA193840). A 5.5-m roll of 38mm costs £20 and is enough to do three ~1.5m circumference rim wheels once. 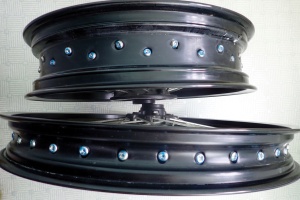 mile-long thread on Advrider with some good ideas and solutions. This tape works best where the well/drop centre of the rim is nice and flat, as on a wide supermoto rim shown above left, or my Africa Twin (left, upper wheel). You’d imagine a curved profile will work less well with tape.

If I was doing such a DIY sealing job again, this time I’d forensically clean the rim with something like 3M Adhesion Promoter 111 (AP111; left; £20 for 250ml) (‘A quick wipe of AP111 on the ionomer is suggested for best performance of the overlapping tape. AP111 will approximately double Extreme Sealing Tape’s adhesion to its own ionomer backing).
But 20 quid a half pint is quite expensive; I know from kayaking

that brake cleaner, acetone (paint or nail polish remover) or any number of other highly noxious solvents like rubber or plastic-eating MEK (Methyl Ethyl Ketone, right) or Toluene will also work. 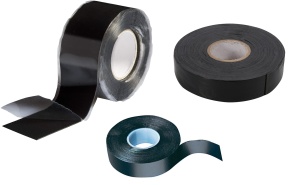 Then I’d seal each nipple with some runny glue so it seeps down into the threads. Let that cure, do it again then a dab of silicon like McNett Aquasure or Bostik 1782 or a mate tried EvoStik Sticks Like Sh1t. Then cap with Goop or whatever before letting it all cure again and taping it all up (so similar to Outex, then). I  note Cyb says silicone is not as oil-resistant as the glues he uses. 3M is a big name for industrial applications but there are all sorts of waterproof, self-amalgamating or self-fusing silicone tapes out there in rubber and plastic for household leaks.
All it’s got to be is soft and pliable to contour the rim well closely, be stuck on to a very clean, oil-free surface, exceedingly non-porous and darned sticky, come what may. I’d
hope 4411 or the

DuPont equivalent: Tyvek, have all these 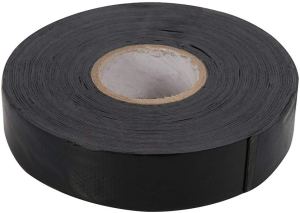 properties, but Tyvek only seems to come in 60mm widths, a bit wide even for a giant adv rim. Seeking to save a penny (will I ever learn), I wonder if several wrappings of self-amalgamating rubber tape (left; only in 20mm widths so overlapping may be needed) might work. It bonds or vulcanises to itself once stretched a bit and is commonly used for sealing leaking pipes,  but is not that sticky, per se, so all it will really do is be less effort than squeezing on the Puraflex. I bought some and am not convinced it will work on a wheel rim as it bonds to itself but not to surfaces.

Outex pads and tape
I belatedly came across Outex sealant tape which a mate has been using on his TTR for years. As with many of these DIY methods, some get on

with it, some don’t as this post shows. Here’s another on adv. Central Wheel in the UK used to sell it but stopped, presumably due to unreliable results from customers. Basically, it’s a set of sticky pads for each spoke nipple, a very sticky and wide double-sided tape applied into the rim well with as few creases as possible. And then a thicker protective

tape over the top. Application video below; a higher-res video here. Costs from £90 to £125 in the UK which seems a lot when you see the other tapes, above. As mentioned, I was about to fit it to my WR, but stopped once I saw my rims lacked the safety bead I go on about. Take your time they say, to try and get all the air pockets out. Using an inner tube patch roller rasp (right) helps; you often get them with better puncture kits.

Have I missed any ideas? Let me know.

Back to Tubeless Conversion Index Page