In my search for an optimal 400-450-engined travel bike that isn’t a CCM450 I remembered the Honda CB400 SS grey imports I’d seen on ebay.

These Japan-only SOHC 400cc singles from the Noughties (about 2002-2009) look very similar to the Chinese Shineray-built 400 retros (branded ‘Mash’ in the UK) which I rode a couple of weeks ago and which go new in the UK for around £4000.

Even more than the Chinese versions, the CB SS really is 70s or 80s technology, right down to a carb. It too has a pleasing retro look and low seat that someone new to a full license might like. But are they worth from £3200 upwards? I nipped over to the shop in west London that sells all sorts of exotic Japanese stuff, including several CB400s for a closer look. 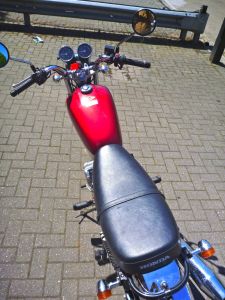 As you may have read, the CB’s engine is a version of the XBR500 we got here in the late 80s – an unusual kick and electric motor that made 43hp. With time and money to spare that might be a motor worth sticking into a trail bike frame. Why not just get an XR600-650? The subframes are too skinny for travel loads. Meanwhile, the 400SS makes a claimed 29hp, the same as claimed by the newer, injected Chinese versions.

I was hoping to see if the 8-year old Jap original might have more poke than the near-new Mash I tried but instead of a burn up along the Westway to Perivale I was limited to a 2nd-gear run alongside the railway arches – my progress further hampered by speed bumps. It’s hard to be certain but even then I did detect a bit more pull from the Honda than I recalled from the Chinese-made Mash. Other differences on the CB include a better operating front brake, a smaller tank, a box-section swingarm and – from the exterior castings at least – a different motor.

But like the Chinese-built bikes, they’re just asking too much for these decade-old CBs. My red example had just had about £500 dropped from the price down to £3200, but here and elsewhere in the UK they’re asking around £3800 – nearly the same as the new Shinerays which themselves aren’t bargains.
I got the feeling these CB400SSs weren’t exactly flying out the door, nor would I expect them to. Look at my 2009 ABS Versys bought for effectively £2100. So while I’m still not sure about the Chinese bikes, at current prices and with locally available XR400s, the CB400SS is not a contender, even if it does have the benefits of native Japanese engineering.

Other 400-cc bikes in the similar category include the more modern, Brazilian made Honda NX4 Falcon (left). They do pop up occasionally in the UK dealers going from between £2200 and an optimistic £3700.

Or how about the Honda Bulldog 400 – only a concept and likely to stay that way, just like the 250 Ryoku Yamaha from a couple of years back. That’s a down-sized CB500 twin engine, in case you’re wondering. Round and round it goes. 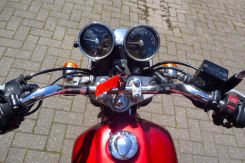 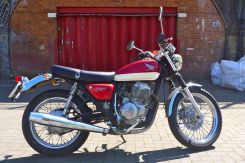 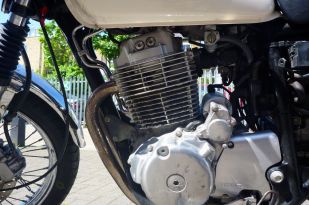