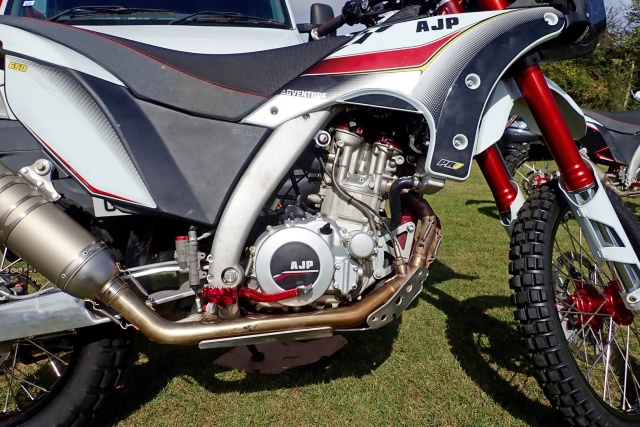 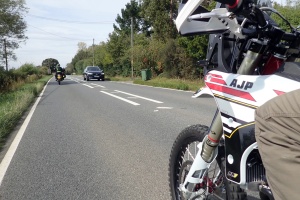 I took a short road blat on an AJP PR7 at the Overland show in August and must say, I was impressed. Like many, I’ve been aware of these bikes for a couple of years but it looks like 2019 was the year they officially hit the shops in the UK.
It looks exceptionally well put together and finished, exuding an air of toughness, quality and design integrity which I found lacking in the similar SWM SuperDual 650X I also tried (same red top, six-speed, ex-Husky TE630 motor). However, the ~184-kilo SWM (below) costs £1500 less so it’s still a contender.
The

Samsung tablet idea could be interesting. It wasn’t hooked up online but I think the idea is you plug in your Garmin navigator to display big via the screen – or it has built-in GPS and you load maps on it, plus it must hook up with mobile signals to run online maps. There’s a USB or two on there too. The main dash pod looks like a clone of a Trail Tech Voyager, a bit small and fiddly but some of that info will display on the screen.

The 600-cc engine has loads of smooth

power for the claimed 48hp (some say 58; which must be the fierce  ’60-hp’ version), but it and the gearbox were much less harsh than I expected. I got up to 60 before I realised I was still in 4th (been riding an auto lately) and I briefly saw 80 in top where I noted the screen worked very well.  By comparison, the thick but too steeply raked 650X screen (below) felt like a wind hose. 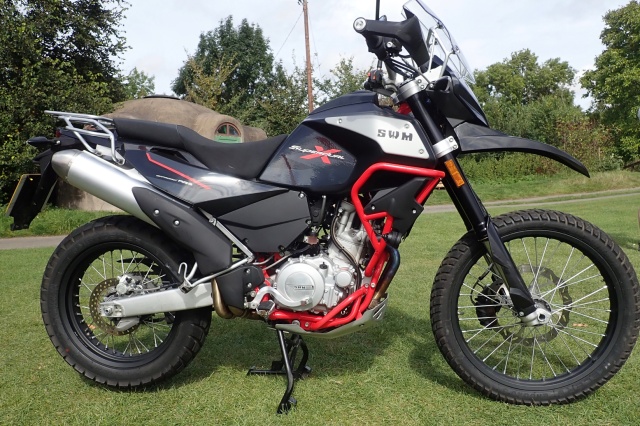 Though it’s 920mm high and narrow, I also preferred the flat seat to the stepped one Superdual X, even if it was 30mm lower. Amazingly, I can’t say vibration was at all intrusive on either bike, but then it did all pass by in a bit of a blur.
The PR7 feels light too for the claimed 165kg wet (again, been riding a 235-kilo NC). The fuel

filler is now in a more conventional position compared to the 250 AJPs, but the 17-litre tank remains low and out of the way under the seat, like 650 and 800 BMWs (and an NC, as it happens).

With only 1.8 litres of oil in the engine, service intervals are 5000km (5500 on the SWM) which include valve checks (same as a Himalayan), but a

s you can see on the right (click to enlarge) a few people have already done long trans-continental trips on PR7s.
Price is a hefty £8500 (alongside the SuperDual’s £7k). It’s the same as an XT700, true, but this bike would

be a whole lot more fun and much easier to ride in the desert or Far Eastern Russia, for example. I wonder if it will be as amazingly economical as the 690/701s because I suspect part of the engine’s smoothness is down to rich running, but I’m told it’s in the 20-25kpl range.
Consider it an alternative to the two Austrian bikes which take more to be adventure-travel ready. It sure looks better.

In November I came across Belgian eric in Morocco who did one of my tours a few years back and was now back on his year-old PR7 with about 20,000km. he mentioned a fuel-pump or filter meltdown in the Pyrenees one time when he ran low. Mpg was no so good – about 20kpl or 330km to a tank. he needed a Rotopax. His Samsung tablet did not agree with the rain. But other than that he was very happy with it. 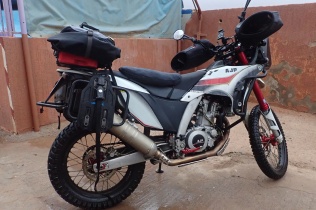 The latest iteration: the 2020 model was announced in November. See video below.