“Having tasted the thrill of off-piste riding, corrugations just aren’t so much fun anymore.”

Not long after 1989 when the original Sahara Motorcycle Tour (SMT) described in the Desert Travels staggered home, a bitter civil war broke out in Algeria as the army annulled elections and unrelated Tuareg rebellions broke out in Niger and Mali. At that time both Libya and the Western Sahara were not accessible and so the brief First Golden Age of Independent Saharan Exploration came to an end.
I took a nine-year break from desert biking until a chink opened up into Libya in the late 90s and I headed out there on a BMW Funduro. Soon I was running vehicle-supported motorcycle tours in Libya and then Algeria also re-opened. The Last Golden Age of Independent Saharan Exploration kicked off. Making the most of it, in 2003 I cooked up Desert Riders, an ambitious expedition. It turned out to be my best pure desert ride on which, with the aid of fuel caches, Jon, Andy and I managed to get out as far as the ‘Lost Tree’ in Niger’s Ténéré Desert, slip back into Algeria and get out again, all just days before a mass kidnapping which marked the beginning of the absolute end for Saharan moto tourism and which we managed to dodge thanks to a well-timed crash.

I looked at our route on a map the other day and realised that maybe there’s something to be said for a 38-litre fuel tank after all. All things considered, we made a pretty good dvd of it too, and in that pre-youtube era it managed to get broadcast in a shorter form on National Geographic and a couple of other more obscure TV channels.

Not surprisingly our actual route didn’t match our plans. Nothing new there. I’m pretty sure the Oued Samene canyon has never been traversed on a bike. One day I’d like to go back there and explore upstream – or nose up from the south to the watershed and see if there really was a bike-proof cliff face up there. But the chances of being able to do that are slimmer than ever these days.

Looking back, I realise Desert Riders was the most amazing ride I’ve done in the Sahara. And looking again at the location of the Lost Tree, we were way out there.
The Sahara has become a dangerous place in the intervening years and I don’t imagine I could ever repeat something like this.

It was in Oued Samene – our famous 4km day – that the reality of riding our 250kg slugs-on-stilts really hit us. But it was also our first cross-country (‘off-piste’) ride down to the canyon’s north rim and it underlined the thrill of finding one’s own way over wild terrain. Exploration: you can’t beat it!

Within sight of the Libyan border, Tarat wasn’t on our original itinerary either, but a fantastic piste. I’d long wanted to do this one and I’d love to do it again. Fat chance these days. Water became a problem for us; the soak at Imirhou was nearly dry, and then the route south to Dider (the cover of the dvd) became extremely rocky, right up to the last couple of kilometres. I don’t normally say this (though I often think it!) but it was a relief to get back to the road and ride down to Djanet.

Here we decided we couldn’t be arsed with the 1500-km run to Tam and back for Niger visas, so we took on an excursion to the Lost Tree instead. Out of town, amazingly we covered the 300km to the Erg Killian food and fuel cache in one glorious day’s riding, all off-piste through beautiful country. Not a single track did we see. It was especially wonderful after the rock-bashing and bike hauling of the previous week up on the plateau.

You never know, do you but the fuel and food dump was all there and intact underneath the sands. We gorged ourselves on Haribo, tinned frankfurters and other junk food and slept as well as we could do, knowing what lay ahead. 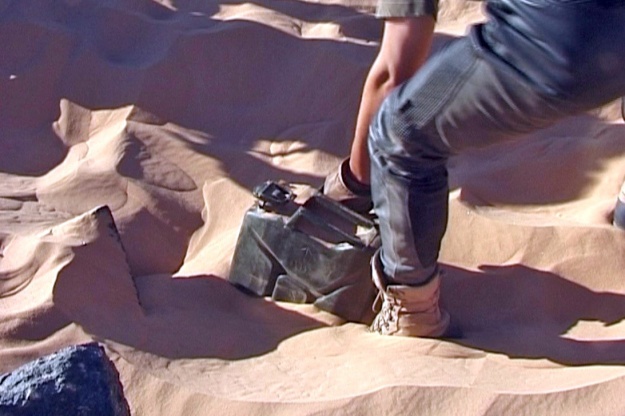 From there next day over the border and to the Lost Tree was across truly terre sauvage. There were some tricky hills around the Niger frontier where we erected the DRP Monument from use fuel cans. And then out into the Tenere itself: butt-numbing endurance. We were illegal and out on the edge, but I at least felt pretty safe as dodgy encounters or all three bikes packing up at once was unlikely. We saw not a soul for four or five days.

Next day on to the Tree and all the way back to Killian we did a stonking 450km – a ride to remember. We paid our respects at the remains of the marble monument erected to Thierry Sabine, the Paris-Dakar Rally founder whose ashes were scattered here in 1986 when he was among several killed in a helicopter crash near Timbuktu. 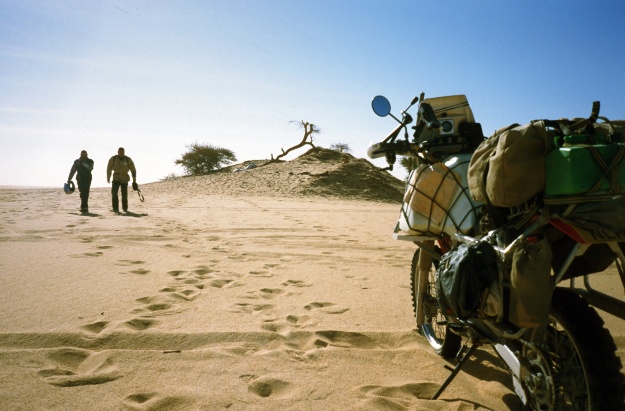 You can see below how Lost Tree is not quite what it was in 1986. Passing travellers had sawn to centuries-old acacia down to a stump over 17 odd years. With the growth in migrant traffic across the Tenere in recent years, the Lost Tree – the sole landmark for hundreds of miles – may have been lost for good. 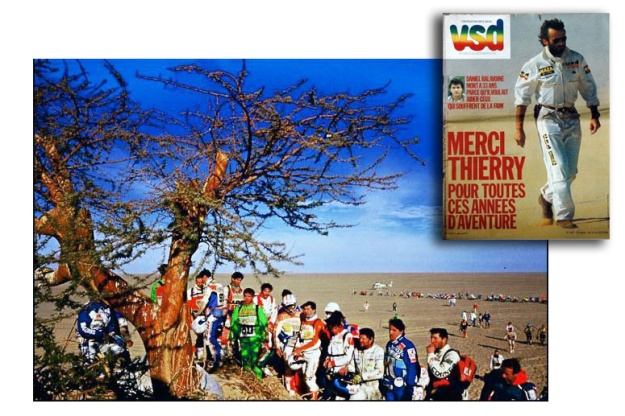 The ride back across the Tenere was topped off with this great shot of Jon scooting down the Erg Killan on his home-made surf board. 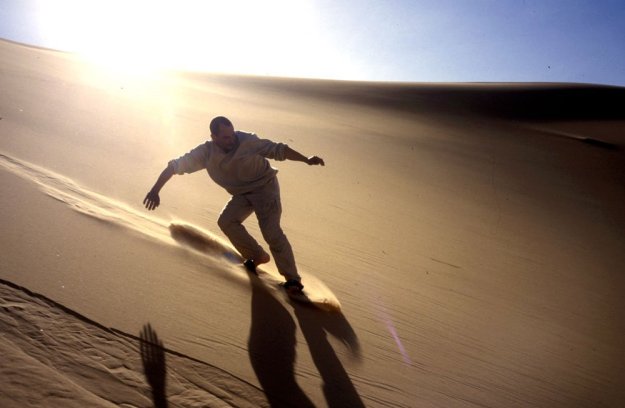 Next day we packed up and rode back north from the Killian cache to Bordj on the Djanet road. It was another great cross country ride until Andy got puncture fever and DNFed with tyre troubles all the way home. Read his story here.

Jon and I took the regular piste west to Tamanrasset as we were keen to have a closer look at Telertheba mountain. We rode up as close as we could over the rubble and Jon trekked right up to the base of the cliffs. But climbing this jagged ridge (it’s been done) would be tricky and as usual we were low on water and food. By the time we got to Tam we felt a bit unsatisfied. Having tasted the thrill of off-piste riding, corrugations just aren’t so much fun anymore.

Jon and I parked up in Tam for a few days (it was Tabaski festival) when a Dutch KTM – a guy I met last year on the Med ferry – turned up with a couple of German mates heading for Djanet. they were keen to hear about our ride out to the Lost Tree.
About ten days later they all got kidnapped in the Oued Samene region along with 29 other tourists in various groups. Arjen and his three mates were released six months later, several stone lighter and not all of them the same people. One woman died of the 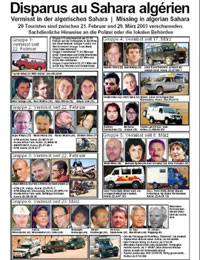 heat on the plateau (2003 was an exceedingly hot summer in the central Sahara, even by Saharan standards).
Desert travel in Algeria never really recovered from that event which went on to spread all over the Sahara under the banner of the GSPC, Al Qaeda of the Islamic Maghreb (AQIM) and these days, more splinter groups than the Life of Brian scene.

But we didn’t know any of this yet, so Jon and I set off through the Hoggar, our back-heavy XRLs cutting through the hairpins like half-sunk canoes. Still, a cracking ride even if the rough western descent took it out of our alloy panniers (never again!). From there we were heading up the easy Amguid piste to climb Garet el Djenoun. Or so we thought. From Garet it was a 100 km or so to the last fuel cache* and try and reach to the Amguid Crater**, though to be honest we didn’t hold out much hope on our radical canyon approach route from Foum el Mahek. 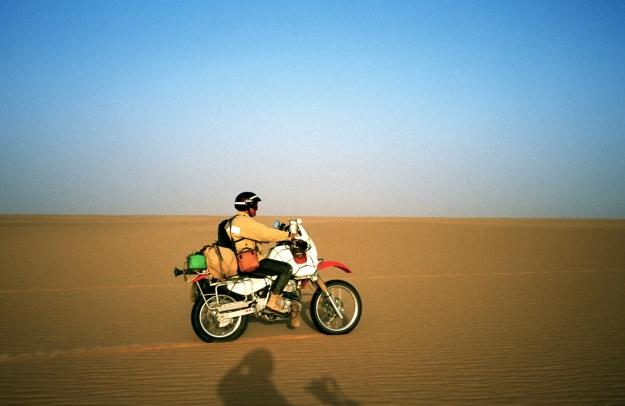 Then I crashed out so that would all have to wait for another time, and with the spate of abductions and restrictions of the following decade, that time may not be any time soon. The desert party that started in the late 1970s is over. Me, I’m just pleased I packed in all the Algeria I could in the good years. I still try and go back to the Sahara most years, but Desert Riders marked the end on an era in a fabulous place with the richest memories of my original desert travels.

* We picked up the fuel in November 2005 during another visit. A bit of evaporation but 90% there after three hot summers under a rock.

** And in November 2007 I reached the amazing Amguid Crater with a camel caravan. 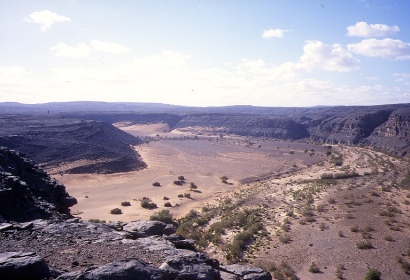 The road south along the Gassi Touil 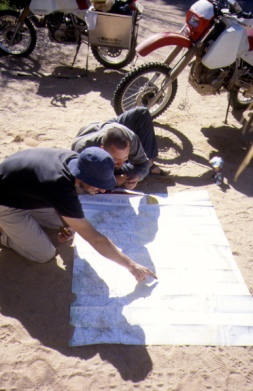 Walking the bikes down into the Oued

Well in the Hoggar foothills 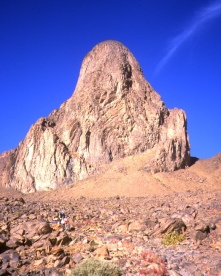 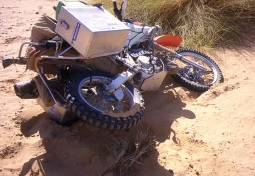 Hesistate on soft sand and you’ve had it 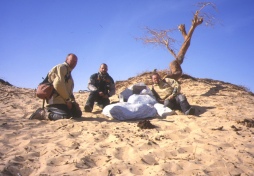 At the Lost Tree (Tenere desert)

Exposed camp in the northern Tenere

Trying the bikes out on the sands

No tracks except our own!

Southeast to the Tree

A lone marker in the sands