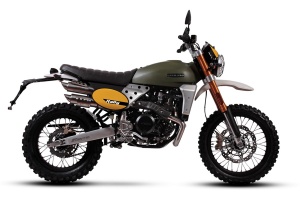 singles: the Dirt Track, Scrambler (above) and taller Rally (left) in 125-, 250 and 500cc variants. Fantic also produce skinny, dirt competition bikes (plus MTBs and eBikes in the US), but with the nine Cabs, they clearly believe that capitalising on the current retro fashion – based rather thinly on their 1980s trials and dirt-racing legacy – is a way forward. Good luck to them; just as

long as they don’t revive that hideous two-stroke 125 chopper.

The 500s use Zongshen’s NC450 449-cc engine, tuned, we’re told, to Fantic’s specs. Along with Shineray, Zongshen is one of China’s leading moto manufacturers who don’t just pump out 125s and 250s, and have their eyes on bigger capacities still.
With the DR-Z400 unsold in the UK for over a decade, the disappointment of last year’s Honda 450L and my recent Himalayan filling a different niche, I wondered if the Zongshen motor might be the missing link between 250 trail bikes and 500+ twins? 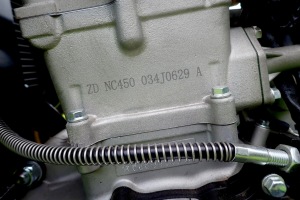 The 4-valve SOHC water-cooled NC450 isn’t yet another clone based on a late-80s XBR Honda motor as found in the old WKs, the Mash and many other Chinese 400-cc bikes (under various brands) including the now-discounted SWMs 440s. The NCs are a cut above that and in 2017 Zongshen entered five NC-engined bikes in the Dakar. All DNF’d, but mostly due to crashes.
No surprise then that the compact six-speed NC engine looks more like the 450R in the CRF450L. Could this be a travel-friendly Goldilocks motor CCM should have used in their GP450 (had it been around), and with more realistic service intervals than Honda’s 450L? A quick spin on the Fantic Caballero Scrambler might provide answers.

In the US, CSC directly import the Zongshen RX4 (right) which uses Zongshen’s NC450. It sells for $6000 but like many Chinese bikes, with prices now exceeding what we’ll take a chance on blindly, manufacturers seek to add value with a lot of extras and bulked-up bodywork which with the RX4 whacks the weight up to over 200 kilos, more than a stock CB500X. More here

Going for around £6400 new, my Fantic Scrambler had under 600 miles on the clock and riding out of Horley, at

low rpm felt a bit cold-blooded, with hesitant fuelling spitting pops and bangs out of the pipe. This wasn’t a softly tuned, rattley old plodder like my recent Enfield Himalayan.
I realised: OK, so this is how it’s going to be. The Scrambler 500 likes to be gunned and the noises spitting out of the pipe are part of its character. What a shame then that I was stuck among the leafy, 40-50mph-limited byways of Sussex and Kent, with vans pulling out of driveways, tractors flinging crap in all directions crap and hatchback mums tootling about on errands.
Providing you were a few thousand revs above idle, the motor responded instantly to the heavily sprung throttle and the snicky gearbox and taught drive train drove the bike forward. The fat-profile 17/19-inch Pirelli Scorpion Rally STRs stayed well inside their comfort zone while 150-

mm of travel on the 41-mm USD forks occasionally thudded over sunken manhole covers. The twin canned Arrow pipe managed to hit just the right balance between obnoxious din and an over-muffled parp. But high pipes need intricate routing to avoid both cooking and dislodging the right leg. The burning sensation at my right ankle soon cleared once the thermostat opened but stood up, the panel pushed the shin out like a Triumph Scrambler. Looking underneath, there’s room to route it low with chassis rails to take a sump guard.
T

he Bybre brakes worked as well as they looked, with little pressure needed to haul on the 320mm ø front disc. A quick stab at the back proving the ABS works like it should.

The Caballeros are said to weigh about 160kg with ~12-litre tanks brimmed and the minimal nature extends to the switchgear and a tiny speedo. I must admit I missed a gear-position indicator – there you go, I’ve come out and said it! – but also the not-working (or disabled?) rev counter. It’s integrated a little too cleverly into the periphery of the dial, overlapping the fuel and battery level indicators. Blundering about with the display scrolling came up with trip meters and maybe remaining fuel range and battery charge (again). Even stood still it was hard to tell, but there must be a way to adjust the clock and hopefully flip to kph. Also, the unit looked set a couple degrees off in the housing.

I pulled over onto a village green for a closer look at the Scrambler. It’s a good-looking machine and the black, all-19-inch, black, Flat Track version (below) is even better (though I might spec the Scrambler’s fatter seat). Big chunks of CNC machined alloy were bolted to the black Cro-Mo frame, the brake pedal tip is replaceable and the gear shifter folds in. I like the rectangular route of the long header with integrated catalyser; a clever way of extending the pipe (long pipes = better torque). It mirrors the big radiator above, capped with a header tank that’s not just tacked on the side for once.

There’s a feeling of solidness which matches the ride, only spoiled by the odd flaw like the oil filler cap right under the 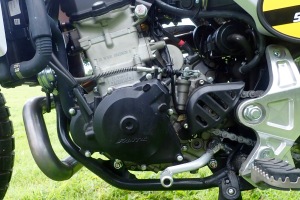 scalding header (right), the pillion footrest under the bulging sidepanel /exhaust guard, and some scruffy wiring on the left side of the engine (left).

At the bars the ABS is intuitively disabled with a button, but the non-self-cancelling indicator rocker switch took a bit of getting used to, and the high/low beam switch is not one I’ve seen

before and might be tricky to flip quickly at night. While doing that it’ll also be interesting to see how that multi-bulb LED headlamp lights up the night. On the back, the tail light must be the legal minimum size, as is the front fender. Get over it; that’s the look! The top of the plastic tank cover has an inset panel and strap slots which I’m guessing is there to evoke the enduro scorecard holder from a 1970s Cab’, but will hold a BLT just as well.

It was time to head back to Horley, only now with a little more gusto. I’d already decided that in this state of tune, Fantic’s take on the NC450 was a bit too fruity to make an agreeable long-range travel bike. I’d trade a bit less top-end surge for some low-end grunt, plus cleaner fuelling. It reminded me of a hot-cam’ed TT500 with an over-sized slider carb which all only works towards WFO.
But for the moment, let’s just enjoy squirting the Scrambler from bend to bend, van to van and 30-mph-village to Kentish village. Out on Britain’s lonely moorland roads the Scrambler or the Tracker would be a blast. I got up to nearly 80 and the bike and engine still felt as solid as a bell and with more to give. Retuned and in a less Spartan, low-pipe configuration like the Him, it might just plug the hole for a light, dirt able travel bike which Honda’s 450L failed to do.

Many thanks to T. Northeast in Horley for the test ride. 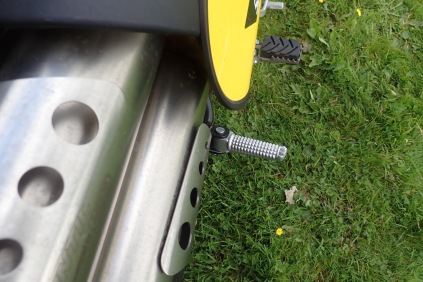 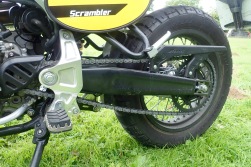