Let me tell you, I’ve done my share of mind-blowing desert biking, seen attack ships on fire off the shoulder of Orion and all that stuff, but the WRT will be among the best 150 miles you’ll ever ride.

You left me crossing into Utah trapped in the lyrics of the Long-Legged Guitar Pickin’ Man. The rear tyre split hadn’t grown  and overnight in Cedar City the temperature dropped by over 30 degrees to less than 50F; good for tyre longevity. So I plugged in my Aero’ Kanetsu vest and took off up UT14 into the pines planning to follow 143 over the Cedar Breaks and down to Panguitch. 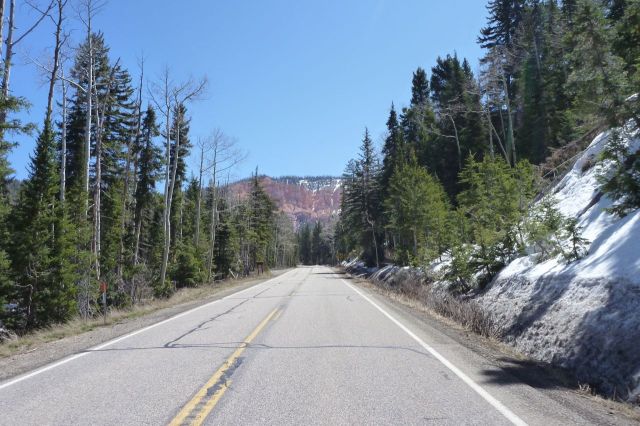 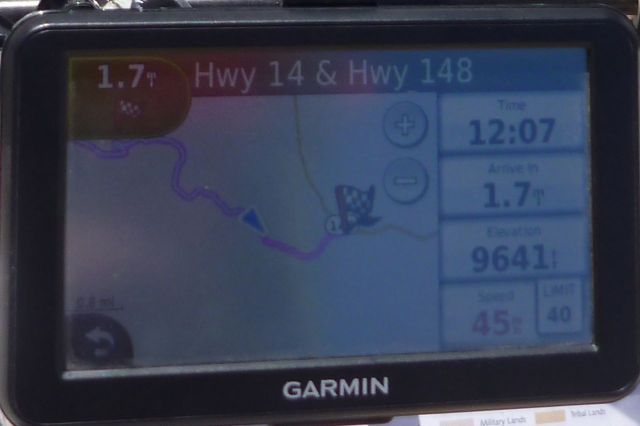 Even before I got to the turn off it was getting on for 10,000′ but the CRF held it’s own. Altitude doesn’t really affect it – just strong winds and steep hills. 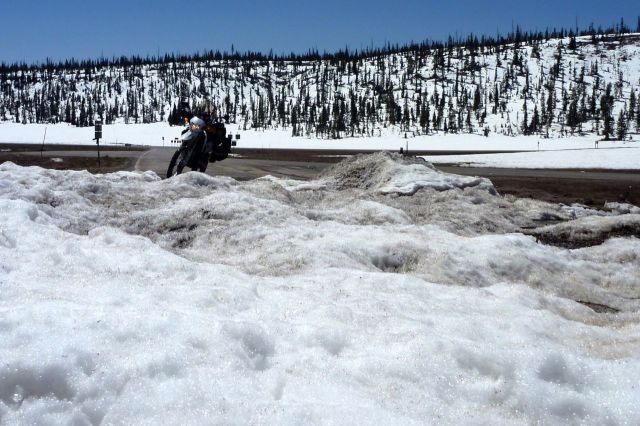 But at UT148 junction the snow barrier was down.

As I stopped, KTM man from yesterday in Pioche rocked up, this time on his Multistrada 1200, Ducati answer to the big GSs. Never actually seen one of these being used. 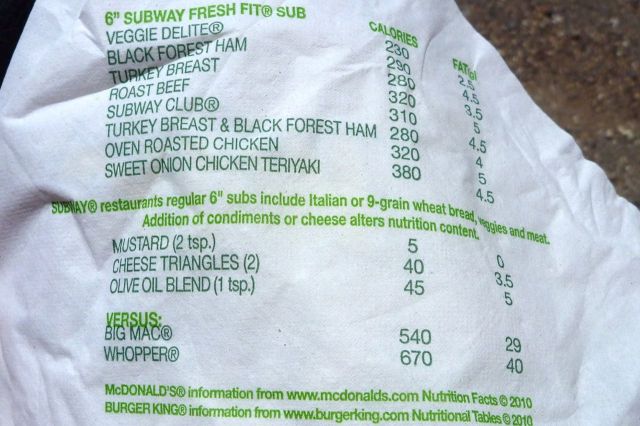 On the far side at the roadhouse on 89 I tucked into my daily Subway against a warm sunny wall. I have convinced myself they’re a healthy form of cheap, fast food.

Certainly healthier than these unidentified objects – battered lamb’s testicles on a stick?

North now, into the fierce and freezing northwest wind. By the time I got smart and added another layer, my arms were quite numb from the cold. 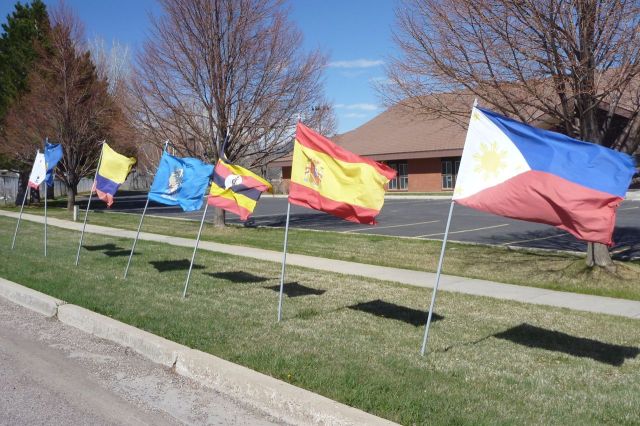 Did I say it was windy? The flags of the world do not lie. 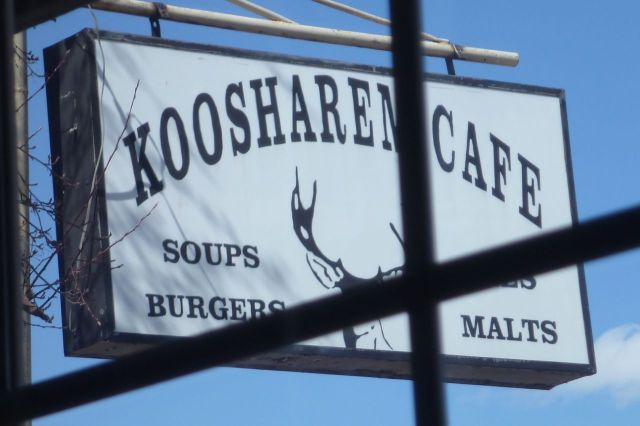 I stop off at Koosharen (pop. 327) for a one dollar coffee and a warm up.
‘Ain’t it cold on that li’l cikle?’ asked a man in a John Deere cap.
A small shed of his had just blown off down the road. 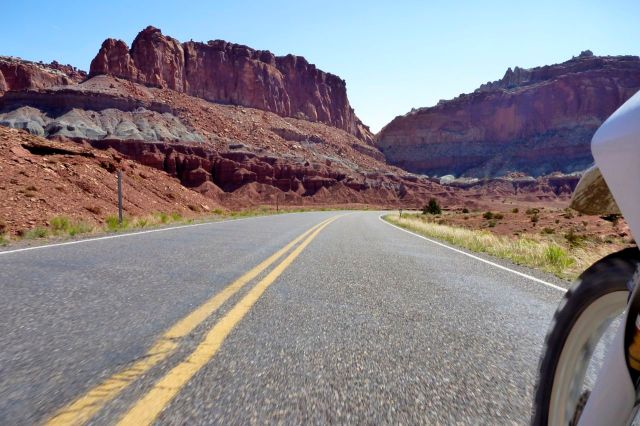 Next day, out of Torrey on the edge of Utah’s Tourist Zone, but even here they have a Subbie! (There are no less than 40,000 franchises in 99 countries rtw). From here farming and mining takes a back seat to scenic drives past red rock cliffs and canyons.

I follow the Fremont River after which the pre-Anasazi Indian culture was named. Their enigmatic petroglyphs adorn the canyon walls. 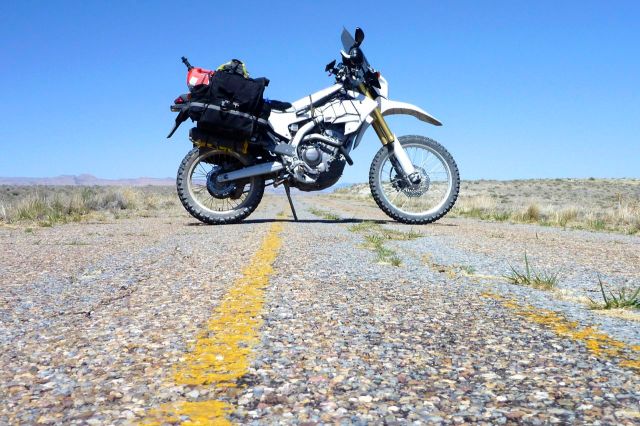 I detour down the Goblin Valley Road and doze out of the wind and in the sun for an hour. Then I cut off along an old road that leads to Green River, avoiding unnecessary interstate.
I like these old roads with grass growing up through the cracks. 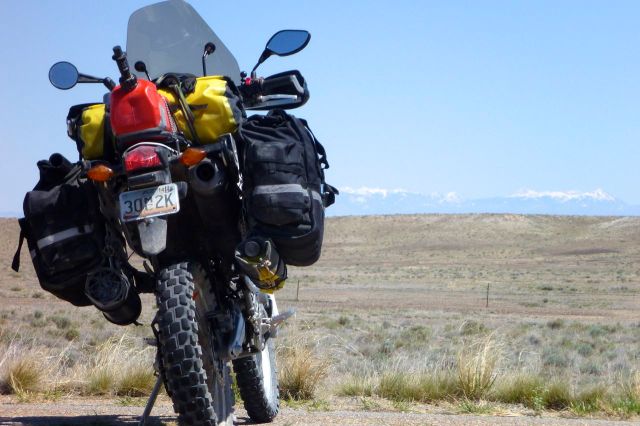 At the back the snowy La Sal mountains rise to nearly 13,000′

Green River has it’s own hooning hill. I like to think it helps reduce anti-social behaviour.

In Moab I score a cheap private cabin at the old Lazy Lizard hostel. I stayed here 20 years ago, but the Lizard has not responded to the ‘flashpacking’ boom; in Moab no one has. The Lizard is like an old style hostel, which is both good and bad. Then it dawns on me I’m in outdoor adventure central with a trail bike, cheap accommodation and time to spare; I better book up all the nights they got! 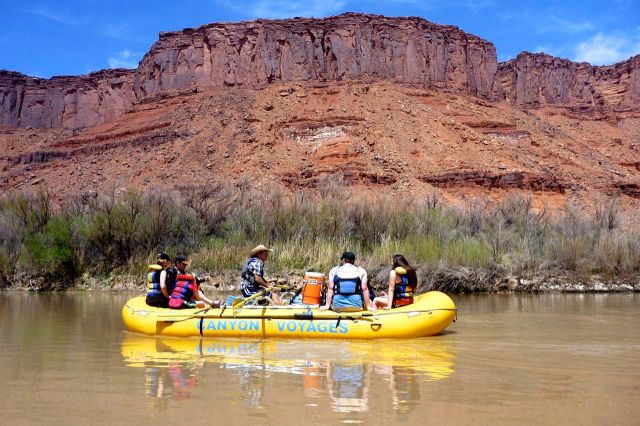 I go rafting on the Colorado just out of town, in an IK alongside.

Unfortunately this couple from SLC were in the IK for the best bit – rats! 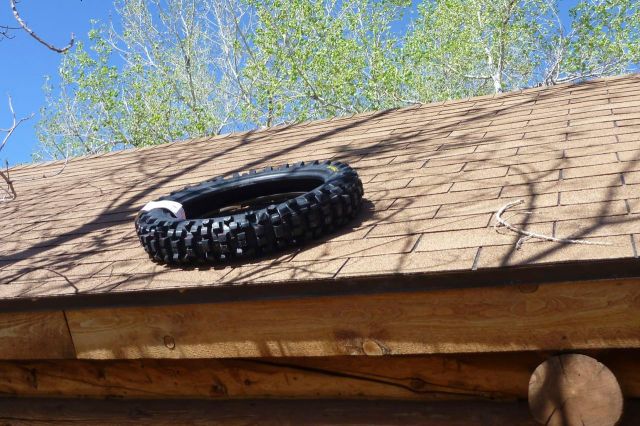 My cheap online Kenda tyre won’t be here for another few days so I buy a Maxxis Desert up the road for around $110 and leave it on the roof to soften up. It’s an old Indian trick.

Then I go and rent an MTB and have a crack at the Slickrock Trail I remember well from ’94.
I don’t get so far – it’s got a lot steeper over the years; I blame erosion caused by global warming though other age-related scenarios are possible. But on a $2000, full-sus Santa Cruz SuperLight 29 with more traction than a gecko in a jam jar it’s a lot of fun.

Creaking and screeching 4WDs share the Slickrock but not the same trail, although motos can ride the cycle trail.
In fact, the Trail was invented by motards back in the 60s. I wonder about coming back on the Honda, but even unloaded I don’t want to risk the clutch on some of the sudden, very sharp ascents.

If you dig MTBs you must come to Moab for the Slickrock and all the rest. 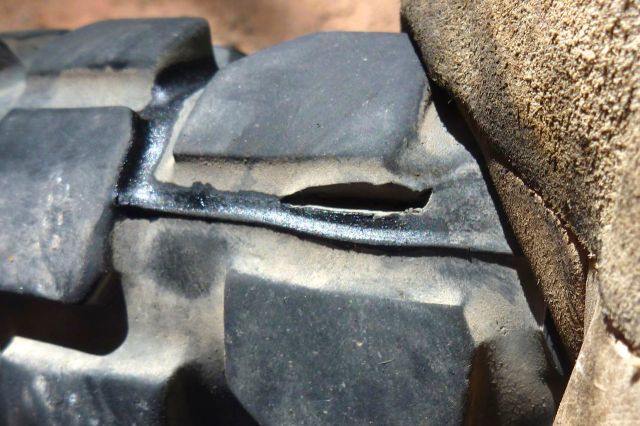 That split never grew in 500 miles but I still think the right flake on a dirt road would have nabbed the tube, Slime or no Slime. 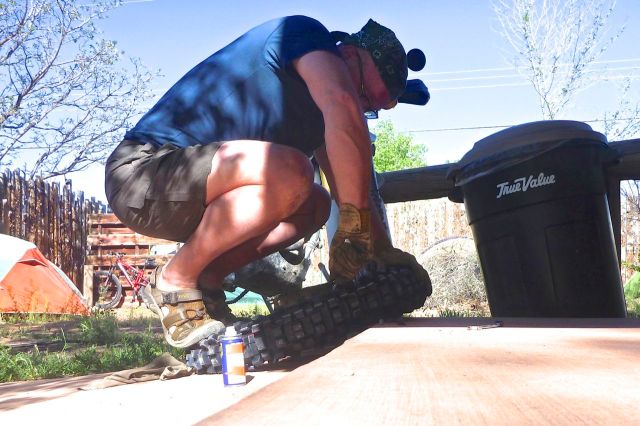 Even sun-warmed it’s a stiff tyre, but with technique and a bit of WD40 it slips on with just two levers.

Time for a ride. I set out on a 90 mile loop, part of the UTBDR north of Moab. 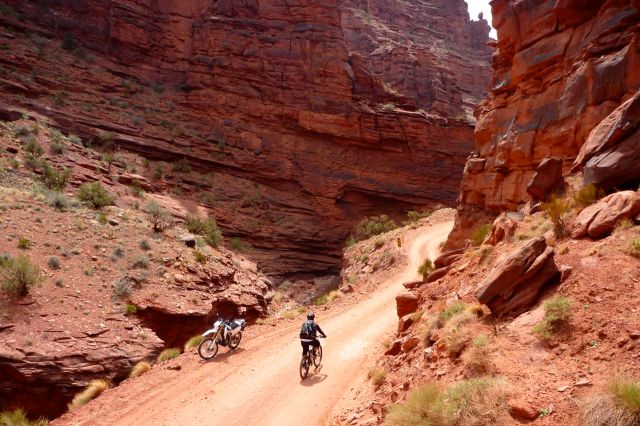 Up lovely Onion Creek with a dozen or more shallow fords to cool the feet.

Then steeply up onto the La Sals at some 8000′. A bit chilly now and the over-sprung, shock chatters on the rocky ascents.

La Sal – don’t know which one.

Castle Valley, I do believe. 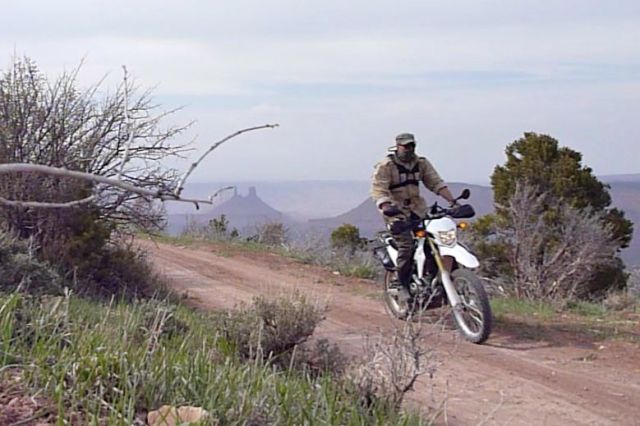 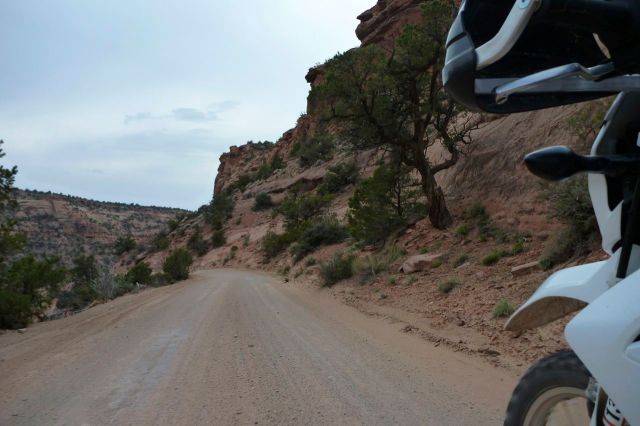 And back east, down part of the MTB Kokopelli Trail and along easy Sand Flats Road past Slickrock where I detour for a quick one just to say I did it.

In town I spotted this old 136cc 2wD Rokon on a trailer. Little changed from the 1960s, I think you could call that a ‘functional-brutalist’ design. They still make them today: rokon.com.

It’s time to finally tick off the White Rim Trail. Twenty years ago I tried to rent an XL500 off Arrowhead to do the WRT but the guy was not so keen. Even today it’s hard to rent a road legal DS in Moab. Plenty of other OHV stuff to be had if you have a trailer or a ute. 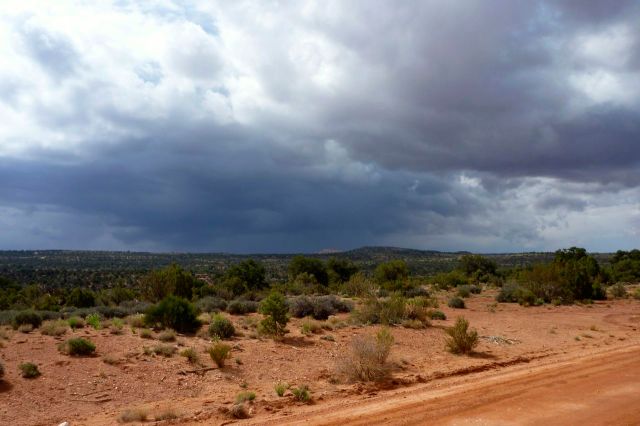 The weather was not so good; it had rained overnight, hopefully enough to settle the sand and dust but not turn it into mush.
I saw a few bolts of lightening through the day but only got rained on for a few minutes.

At the end of Mineral Bottom Road is the big drop to the Green River valley.

A plucky MTBer takes the last big climb after 3 or 4 days on the WRT.

From then on it was kind of sandy, but only for 200 yards at a time. No rain dampening here so to be on the safe side I paddle laboriously. I hoped it wasn’t a 100 miles of this…
How do these MTBers manage?

At times you’re right by the river; lose the front and you’ll make a splash. Elsewhere you climb ‘inland’. I think it was the sandy climb up Hardscrabble Hill that made me glad I wasn’t towing luggage. I actually stopped and looked back over my shoulder at the 1 in 2 sandy hairpin on the way down and thought, cripes, that would have been hard to get up.

I’ll let a few pics do the talking… 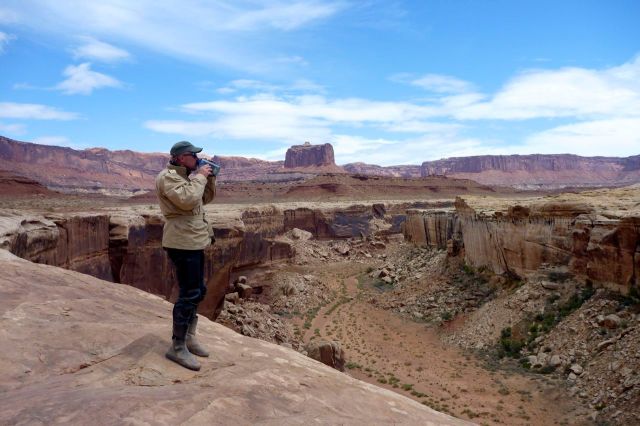 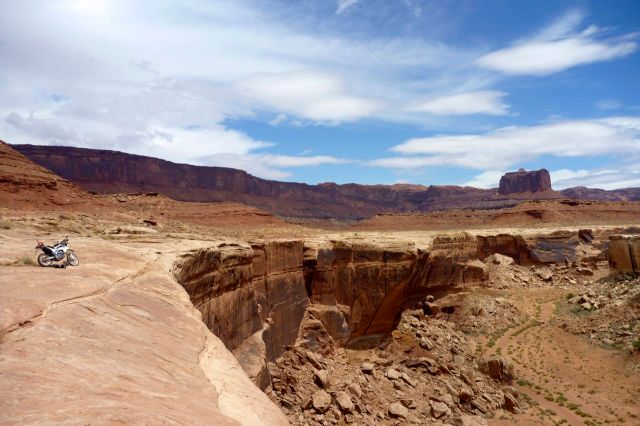 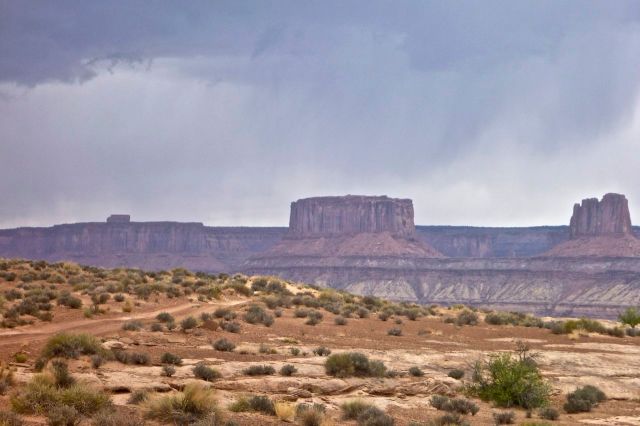 At the top of another long climb, possibly Murphy Hogback around Mile 70, I meet a guy on a fully loaded 1150. And I mean fully loaded like he was going to Alaska. And on Anakee tyres too…

I didn’t know it then but I’d nearly completed the harder, sandier half of the WRT which he was heading into. I warned him about Hardscrabble Hill and doubted that tank would make it. but he seemed a confident rider. 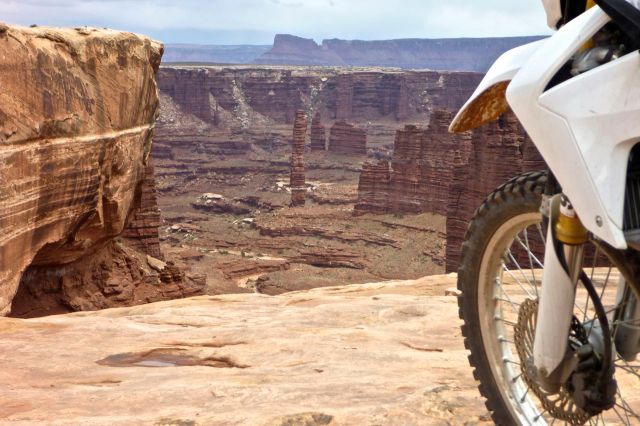 Soon after I turned back north at the halfway piint: White Crack turn off, I stopped to fill up and finish off my footlong Sub. Someone had advised not to bother with this side – I presume because it’s easier?

But that suited me just fine at that stage; I was riding more fluidly after the morning’s efforts and the spectacles kept on coming, now with the Colorado River on my right.

So I rode up to the top; Island in the Sky. 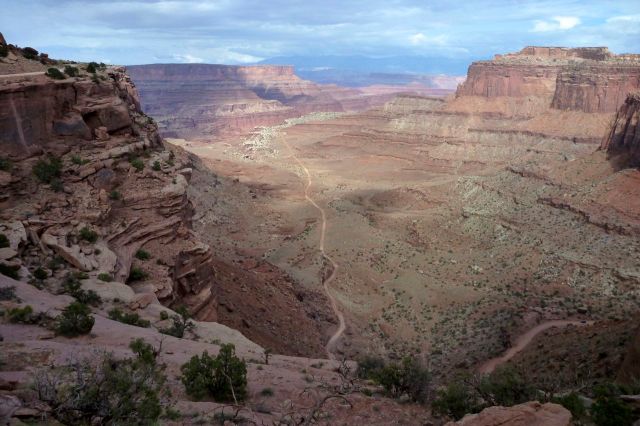 And coasted back down to keep the pads warm in the evening chill. 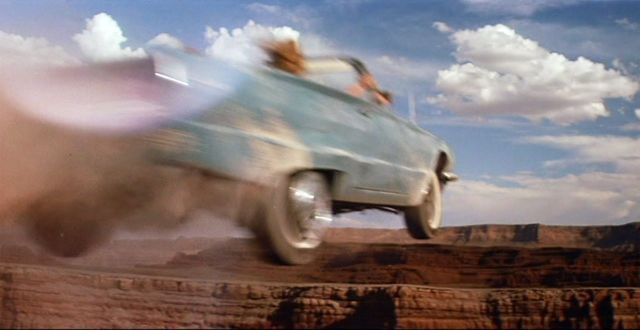 I learned later that I’d passed under the rim of Dead Horse Point where Thelma and Louise took their fateful leap, gunning their T’bird into the abyss, yelling “You’ll never take us alive!”. For a Hollywood movie, that was a great ending.
I continued along the Potash Road, 30 miles back to Moab; a bit rough, or I was starting to feel the miles by now. 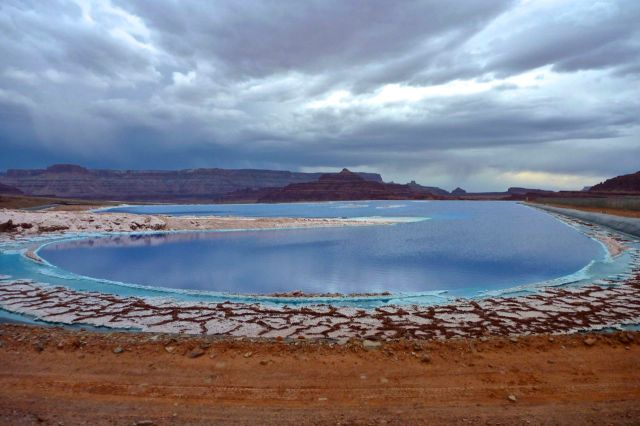 The mining works after which the road is named were originally a regular mine. Then they adapted it to effortless ‘solution mining’ by dissolving the subterranean potassium out with the aid of brine, pumping it up and then allowing the water to evaporate and the minerals to crystalise in shallow ponds.

Blue dye is added to help the solar process. They separate the salt from the potassium later.

I rode back into town nine hours after setting out, just as another deluge got ready to drop its pants over Moab.

Let me tell you, I’ve done my share of mind-blowing desert biking, seen attack ships on fire off the shoulder of Orion and all that stuff, but the WRT will be among the best 150 miles you’ll ever ride.

I’m now waiting for the weather to clear before heading down through Canyonlands’ Needles District and on to the AZ border. It seems the temps are about to take another 20°F hike up the scale.