Where: Spain and Morocco

In a line: Looks cool and works great with Qwik-Strap goggles and a non-ballistic ride. 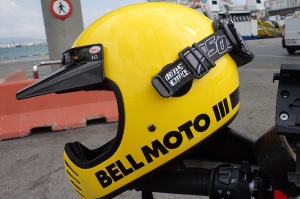 The iconic legend has returned! When the original Moto-3 was created back in the late 70s it was a product ahead of its time. Quickly becoming the industry standard in performance and style, today’s Moto-3 is everything it was style-wise, with the added benefits of modern safety and production advancements. From the fiberglass composite shell to the EPS-lined chin bar, we left no detail unpolished. The solid colors use the original style terrycloth liner, which is removable and washable.

• D-rings a bit fiddly
• Not full face protection; the old bug or chip will get through

Review
For years I’ve been mostly wearing a costly open face X-Lite 402 or an inexpensive Bell Mag 9 with full face visors. Best thing is the great visibility and protection plus you leave it on to talk to people (less faff with glasses, too). But sometimes I miss a full face’s ability to be securely cable-locked to the bike via the chin bar (doing so via the D-rings never fooled anyone). And it has to be said thee types lids look good too.
I don’t usually get on with ‘in your’ full face lids like an X-Lite X551 I tried, but after  few thousand miles the Bell Moto III has suited me just fine. The wide aperture and the fact that the chin guard isn’t right in against your mouth makes it unobtrusive on the road while not feeling too claustrophobic when not on the move. Usually I can’t wait to get a full face helmet off my face.
I’ve been riding a Himalayan with a low screen at no more that 65mph, and at that speed buffeting or neck strain hasn’t been a problem. There’s no annoying bobbing around and the wind noise is what you’d expect when riding a motorbike.
Inside the lining has a nice, towel-like surface (terrycloth they call it) and all of it removed and refitted easily after washing – not all lids manage that. Only the double D-rings can be a bit fiddly – I seem to recall the X-Lite does it better.

I had an original, but beaten up old Moto III in the early 1980s – a nice-looking lid but as cozy as a brick-like inside. Goggles were always a bit awkward to move easily one-handed while riding. Decades later we have Qwik-Straps which I tried in Algeria last year and bought again for the Moto III.
As you can see in the pictures, two short straps fit in your regular goggle anchor slots, then two separate attachment pads glue to the side of your lid. One is velcro (best fitted on the left); the other is a clip-and-pivot stud. Clip the right strap to this pivot then pass the goggles over your face attach to the velcro. Undo the velcro and the goggles swing down to the right. Or – as I got used to doing – unvelcro and swing the goggles over to the back and re-velcro. Goggles are securely out the way but not dangling. It’s a clever system which definitely helped make the Moto III a much better travel lid than I expected.

IN A LINE
Good looking, comfortable and cheap full-visor open face, but as usual, visor actuations can get problematic.

WHERE TESTED
Riding around SW USA on backroads and dirt roads. And a few trips in Morocco.

COST
Discounted to something like $75 delivered from motorcycle superstore. Original rrp was $169. Discontinued model; superseded by Mag Sena 9 at around $180.

REVIEW
I’ve always had a soft spot for Bell helmets from the era of Kenny Roberts flat tracking and my own Moto III (right). I’m sure glad I never had to crash in that old head brick, though!

Needing to save weight on the way to the US, I saw the new Mag Sena announced and liked the look of it, with its jaunty centurion-like anterior lip. It took me a while to work out there was a non-Sena (intercom system) available and that it had been around for years: the Mag 9.

Not only did the looks appeal, but it turns out to be one of the best lids I’ve had in years. At first I thought I’d bought a size too small; in the US what is labelled Large is usually a Medium in Europe – not unlike everything else over here in fact – from food to vehicles. So it was with the Bell; my much repeated head measurements lined up and the Mag 9 in medium was snug out of the box but now fits just right.

It may not look very ‘ay dee vee’ like the ubiquitous Arai XDs which come free with a GS12, but give me a lid without the in-your-face chin guard any day. For moto travelling in AM Zone (right) the advantages of an open face are well known. You can show your face to the peasants and the cops and generally get a better response as a recognisable human being, compared to the full-face spaceman image. And like I’ve said, for me the less I feel I’m wearing a lid the better. You can pay for the gas while wearing this – being Arai-d up might set off the alarms. Then you can add the fact that you can feed yourself on the move and scratch an itch. Outside of winter, for world travels, this is the helmet style for me.

The ‘ear pouches’ envelope the ears. I don’t wear them, but no need for ears plugs here; this is one of the quietest helmets I’ve had (though used mostly with a short screen and at low speeds). As for the vents, I’ve long believed these make little difference on the road and I’ve no reason to change that view with the 9.

The sun visor is such a handy feature as long as it’s kept clean. Shaded main visors are not so convenient for reading glaring satnavs or of course night riding; flip down the sun visor and you’re in business. I also like the dirt-bikeresque beak element on the Mag 9 for riding into low sun angles where no shady visor can help, but it’s not low enough to do that well. It’s something I see that Arai have on their  CTZ (right), but, snakes alive, is that an ugly contraption for no less than $500.

The linings on the Mag are plush and cushy and pop out easily for a wash and the visors are easy to clean with the windscreen wipe stick you get by the pumps.

But, as with the Airoh and the expensive XLite, the sun visor actuation gets stiff; it usually seems to be a problem with leverage, although with the Bell it’s become more likely dust from the trail has jammed the lever and release mechanisms a bit. I’ve tried rinsing and may go for a full-on hose down to clean it out. The sun visor retracts with a nudge if necessary but lifting the main visor has become really notchy – don’t know what the problem is there. The racket it makes and effort needed doesn’t make it an enjoyable and slick manoeuvre.

I also recall I read reports that the Mag 9 suffered from the main visor not lifting high enough. I suppose that is true though you can tip the whole lid backwards to get it out of your eye line. Being out on the country, not riding in town, I usually have the visor down. I think it’s safe to retire my Airoh TR1 now; comparatively, it feels like wearing a milk crate.

After wearing it for a month on Morocco and four years use, in 2017 I left my Mag 9 in a dumpster in an industrial estate Malaga. The visor was getting on a bit, the D-ring buckle seemed to loosen up easily, and the peak assembly was duct taped on after a few rough transits and very strong headwinds out of Tangier. It was starting to feel a bit cheap but I like the look and features and can safely say I got my $75-worth out of that lid.