I’ve been giving a lot of thought about what sort of a rack to get made for the GS. Obviously buying one and if necessary, adapting it would have been easiest. I tried to order the Hepco system a couple of years ago, but only the back bit was available which sticks out as long and thin as a diving board. Could I have got them, the side frames are

hardly ideal as they’re also set miles back (left). The only reason I can think of is that you’re expected to go touring two-up on your GS and so there needs to be room for the pillion’s leg.

Two up is not my long-range moto-travelling scenario – certainly not on the GS5. Then I spotted a set of pans which had been mounted a few years ago on a GS with some H&B racks (right – click for full size). They look more like Givis and the leverage and width makes my knees go weak. Of course the set up may well have suited the rider’s prefs just fine – he probably wasn’t planning on despatch riding in Jakarta or setting a land speed record down Ruta 40 in Patagonia, but I’ve done wide with that BMW, and as so often happens, the sub-optimal experience makes me swing to the other extreme (as evinced by my first and second desert bikes).

Trawling the web one more time in search of off-the-shelf rackage (there’s a list on GStwin.com) not surprisingly came up with nothing more than more tailboards and those anathematic Ventura ‘spine choppers’ (left) that seem popular down under. I first saw one in the early Nineties 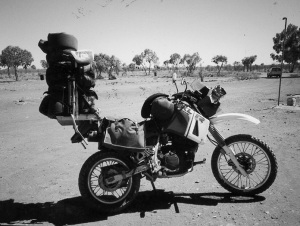 on the Tanami Track in northern Australia and was so staggered that dirt touring bikes (admittedly, possibly two-up?) could be loaded like this that (right) that I put a picture in the first AMH. It’s still there on p76 of the yellow edition, a lazy if convenient

solution to loading your bike like a car. At least in the image left, Ventura admit you might want to load your sack forward when solo to improve ‘weight distribution’. Tell me about it. That was in the Mesozoic era of moto overlanding, you’d think evolution continues in the right direction, but circa 2012AD, don’t count on it.

Anyway, by some baffling oversight, accessories for the Suzuki GS500E do not feature in the brick-like Touratech catalogue so I’m left with getting it made.

Before the rack cometh the subframe, often a weak point on mono shock motos. I like the way this notoriously skimpy XR400 subframe has been strengthened with a plate at the back of the subframe triangle for possible luggage duties.

… is a rear rack that attaches to the subframe and other key points as low, forward and close to the bike as possible so the load follows suit, while allowing for those instinctivecorrective dabs when losing control, as well as paddling in soft terrain or when out of fuel.

In a nutshell the mass wants to be as close to the bike’s putative centre of gravity which, with a load and rider aboard, is I suspect in the region of the carbs (right).
As you may know ‘centralisation of mass’ became a buzz word with Honda bike design a few years ago, and was also applied by bike makers like Buell. It makes sense, especially on a loaded motorcycle traversing the less than perfect roads we find out in the world. The more central the mass the more predictably the overland-loaded machine responds to the forces of its own inertia as the suspension moves the sprung weight up and down over rough terrain. That adds up to better control, no freaky handling vagaries like tank-slappers, smoother riding and so less fatigue. All up, the key to surviving a long day on the road in the AM Zone.

Whatever happened to the platform rack?

The principles of mounting a DIY rack are well known: three + points on each side (front or pillion peg and two on the subframe), plus a brace across the back, nicely demonstrated in the rack on the right from Off The Road in Germany for my old XT660Z (rack no longer listed, AFAIK).

I see that Andy Strapz is now recommending his racks to help locate (as opposed to support) his throwover panniers. It’s the way to go for serious overlanding even with soft panniers (more below). He uses the usual rectangle but with only two attachment points per side and doesn’t even have the back brace… Clearly his racks are designed primarily for his throwovers which merely use the rack as something to strap to so the bags don’t swing and slide around, but the lack of triangulation over the plain as well as no back brace is not a good idea. It could easily lead to deformation of the mounting bolts when any levering force is applied in a heavy fall, or when someone grabs your rack to help load your bike into a canoe or the back of a van. Two points would work fine if it was just a mostly straight bar running from footrest to tail lamp to keep a bag out of the wheel/off the pipe. For overlanding mounting a rectangle frame (a plain) from two points is a job half done, although adding a back brace (easily done) would improve things. These guys on advrider seem to agree.

Many have shown their own DIY constructions on this sticky thread on the HUBB. I particularly like this flat rack on the left. Maybe not as light as one-mil tube, but even I could have a go at welding that.
There another neater one on the right on the 650X. You get a feeling flat bar is not as light as tube, length for length, but it’s tough and dead easy to make and repair.

And this one on the right on the same thread from a V-Stromer in Kentucky. Appropriately agricultural, with barely a bend to be seen and I do like that spacious ‘sheep rack’ on the back, though I might have spared the crossbars a bit and used mesh.

Left is a hi-cap basket rack on an old GS500 no less (source). You can just bung bags, suitcases, whatever fits in there but of course you are saddled with width, although this one does seem notably slim.

Ni3ous also made a nice job on his Tenere rack, but just about all the racks I see hang a hard box like a picture on a wall. The mounting and the load bearing are the same points – surely sub-optimal engineering when dispersing forces is best, although I suppose you could say using an engine as a stressed member of an open frame (like an old 900SS) is a similar concept. It’s made worse by quickly detachable systems for your box which add weakness and complexity. Increasingly I read of riders

simply bolting their alloy pans to the rack to make one solid structure, like that SS engine in the Ducati frame. By doing so they lose the advantages of having metal boxes to sit on at a bush camp, prop up a bike to change wheels and most usefully in an overland scenario if the set up is very wide: wheel a slimmed down bike through a door into a hotel reception for safe overnight parking.

On the BMW 650 twin I used in March, the Enduristans would not have worked without the Metal Mule rack. People do manage of course – usually smaller bikes with lighter loads, but I think for overland travel, classic, strap-over throwovers are a throwback to a twin-shock era. 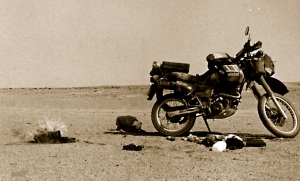 The problem, as many of us have found, is with the high pipe or a trail bike. The panel melts – or on a hot day on the south side of the Sahara (right) – carelessly remounted  throwovers following a crash press hard on the pipe and half an hour later burn to a crisp. On that occasion it was my fault of course, but as with a lot of stuff on an overland bike, loading arrangements need to be foolproof because there are times when you’re stressed and distracted.

In my opinion you don’t want to hang baggage like a picture on a wall; you want to sit it on a platform, like a flowerpot on a ledge, even a throwover. It takes much of the stress off locating/mounting points on rough ground, so making this point less critical (a simple belt will do to stop it falling off), and carries the dead weight low. The trick is not to make that platform a shin snapper should you stumble and fall.