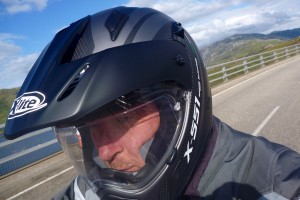 Cushy, well made, looks good
• Peak pivots down for low sun angles
• Good price for plain-ish black
• Can lock to a bike securely

Review
X-Lite is said to be the upmarket range of Italian lid-makers, Nolan; you pay more for a quality feel which hopefully translates to better protection in a crash. Wouldn’t know about that I’m pleased to report, but I like my full-visor open-face X-Lite X420 GT which I’ve been wearing for years (lost the clip-on chinguard years ago). It came after 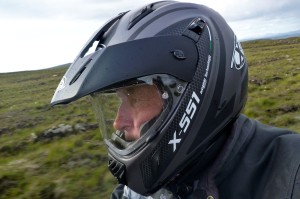 using a similar modular Airoh TR1 followed by a recently ditched Bell Mag 9.  Both of these were under 100 quid so presumably you get what you pay for: road legal protection, good looks but a cheap, creaky feel, especially with the Airoh. For all-day comfort the Bell wasn’t significantly better than the X420, nor quieter or better vented.

What I really miss with my X420 (but which the cheap Bell had) is a peak to keep the low sun out of my eyes, and 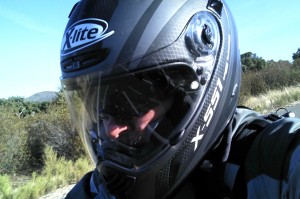 the 551 has one, usefully adjustable back and forth and removable with three screws.
Riding without the peak (left) wasn’t noticeably quieter and in Morocco I found the mouthguard was too close to easily get a hydrator hose in there for a quick drink. I also noticed that the top vents only worked properly with the head tilted so far forward you couldn’t see where you were going; in other words they were positioned a too far back on the shell (this was with or without a windscreen or the peak). 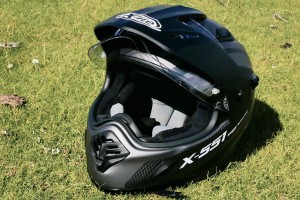 Also, I find I can’t bear wearing such an ‘in-your-face’ lids any more than necessary when at rest, but taking it off meant carefully removing my ‘still-in-denial’ glasses first. Never thought of that, but what an added faff.
Then, the slide-button which actuates the sun visor became unglued (it’s dropped right off my 420 I notice) and for some reason the sun visor was occasionally picking up some random soft glue when retracted which made it even harder to actuate. I have yet to use a lid like this where the retracting sun visor is not stiff to actuate.

Deary, deary me. All these negatives outdid the benefits and made me decide to ditch the X-551 after a few months. I’d still like to try a full face adv-lid but for the moment will go back to my 420 which isn’t noticeably colder or draughtier than the 551.
Instead I bought myself a nice Shoei RJ Platinum (right) for 90 quid with a range of pivoting visors and beaks. I’ve gone off X-Lites. For a supposedly premium-brand, £400-rrp lid, it seems you don’t get what you paid for after all. 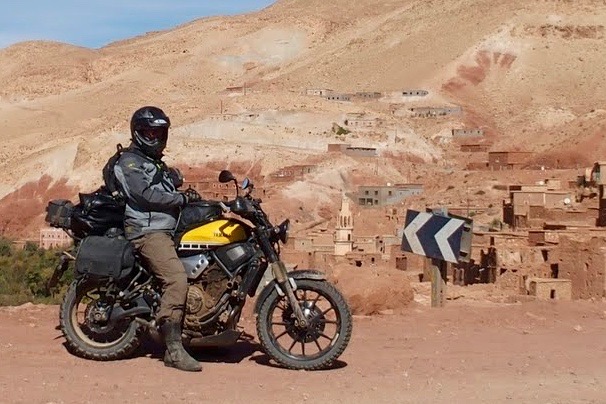