While flicking through AMH7 looking for ideas for the 8th edition, I spotted the box, right, previewing bikes just out, thought to be on the horizon or ones we’d wish to see. Written in 2016, it made an interesting read. The easier-to-read text is at the bottom of the page. 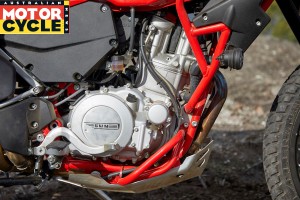 First up: a couple of clangers: when it comes to P-twin 270° crankshaft timing – now all the rage – I clearly got my V4 Crosstourer mixed up

with Honda’s more interesting NC750 twins.
Less obviously, I also assumed the short-lived 650 Husky Terra/Strada engines (similar to the BMW 650s) would be used in what has ended up as the SWM SuperDual 600 X and T (above right). It seems the older but lighter TE630 motor passes Euro 4 emissions regs for the moment. That same motor is also used in the predicted AJP PR7 which is now out, as well as the current CCM 650 Spitfires and CCM’s forthcoming adventure bike to replace their short-lived GP450.

So, did the CRF1000L Africa Twin become an instant classic? It’s certainly become a popular adventure-styled bike, though not necessarily as popular a travel bike compared to the old 750. Probably because today’s range of great bikes makes the new AT less unusual.

The talk now if of a new 1100cc version for 2020, and possibly a 700- 850 after that, because the Africa Twin concept easily outsells the older and less fuel efficient V4-engined Crosstourer 1200 and Crossrunner 800. I’d love to see the heavy NC750X turned and not just styled as an all-terrain travel bike, but that’s a bit too radical. So will rallyfying the CB500X and calling it a mini AT. The alternative is a new P-twin engine for the 700/850 which seems unlikely unless it’s attached to a rang of bikes like the CB500s. Will they pitch it against the tech-heavy KTM790 or the plainer XT700? If the original 1000L is anything to go by, Honda will aim at the Yamaha. 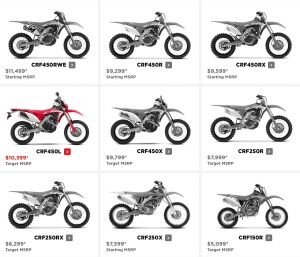 Still with Honda and, hallelujah, in 2018 they surprised us with a CRF450L! Saly, it took one quick look to realise it was just their 450R dirt racer with indicators and – bizarrely for Europe – detuned by over 50% down to 25hp. Worst still, it costs nearly 10 grand and – officially – requires oil changes every 1000km. As my Himalayan has proved, 25hp

is nearly enough to live with, but 1000-km oil changes are not, let alone the asking price. Yes, oil changes could be pushed if the bike is not hammered, but not by several 1000kms. Using the CRF…L designation for a street legal dirt racer was a bit of a dirty trick.

The 660 motor in Yamaha’s XT660Z did indeed fall foul of emissions regs, but seeing only Tracers and XSR700s, my assumption that a CP2-engined Tenere had been overlooked was too gloomy. After an advance promotion as drawn out as Honda’s Africa Twin, the XT700 will finally reach European dealers by September and the US a year later. And with the much admired Tenere brand and knowing the brilliant CP2 motor, I predict the XT7 will become an instant classic even faster than the AT.

As we all known Enfield’s Himalayan did also come to pass. There’s me on mine in the Sahara a couple of months back. Read my 4000-mile review here. And so did the KTM technically sophisticated 790 parallel twin on road and all-road versions, a category which is now described as ‘midweight’. At around 200 kilos, it’s about as heavy as you want in a travel bike.

They say a KTM 390 Adventure may also due out for 2020. The 440 SWMs turned out to be nothing special, playing it safe with retro styling and branding. Who knows, they may bang out a modern travel bike with the 29-hp 440cc motor, but currently discounted by 30% in the UK suggests they’ve not caught on.

BIKES TO WATCH, WAIT AND TO WISH FOR [2016]
Now a compact parallel twin rather than the original V, thirteen years after the XRV750 ended (the XL1000V Varadero has been expunged from the records) I’ll stick my neck out and say the new Africa Twin (right) will become an instant classic.
Adopting both the irresistible off-beat 270-degree crank of the  NC700/750s (and Super Téneré), there’s also optional ‘automatic’ DCT shifting and traction control, both fine tuned for off-roading. The ABS version is 232 kilos wet, but the 21-inch front wheel puts it closer to the KTM category than the GS12, while being much cheaper than both. The fact that they’ve ‘only’ given it 96hp (the same per litre as the CB500X) means they’ve side-stepped the giant adv horsepower race and the 18-litre tank could be good for 400 clicks.
They’re even calling it a CRF1000L to capitalise on the 250’s success. In that case let’s hope they fill the gap with a modern day XR400/Dominator hybrid, a rallyesque CRF450L single with a load-carrying subframe. While we’re dreaming I suppose we’ll settle for an injected DRZ450 or a similar sized mini-Ténéré. Isn’t anyone paying attention to CCM’s GP450?
Talking of which, they say in Europe new emissions regs may spell an end to the XT660Z. The ABS version may be the last gasp, but as it is the XT-Z’s UK price alongside the very popular MT-07 is having the same effect. When a street scrambler-styled XSR700 was annonced, there was some hope the 07’s brilliant 700cc, 270°-crank motor might also get Ténerised, but it now looks like it’ll just be a Versys- or V-Stromlike MT-07 Tracer.
Instead, AJP’s PR7 rally-raid clone might be out by now, last I heard using the Husky twin-cam TE630 engine and not the Minarelli-built XT660Z’s motor. We can also expect an Enfield Himalayan by the time you read this, an adventure-styled 500 which might see Enfield try and break from their reliance on old-school plodders.
‘They say’ – or should that be ‘we are all hoping for…’ a mid-weight KTM parallel twin as an alternative to the beserker V-twins. You can add a mid-weight Triumph to that wish list too, though the 800-cc triples are lighter than you’d think.
As for an adventurised KTM 390, some would sooner see the tasty SWM 440 prototypes (above) reach production, even if the SWM’s RS650 and SM650R (rebadged old Husky ) TE630s) will probably come first.