… what a brilliant trip that was. A great balance of challenge and relaxation. RS (UK)

If you’ve been there and done that, southern Morocco holds no great challenge. From the UK a 2000-km ride brings you to Marrakech at the foot of the Atlas with the great Sahara beyond. 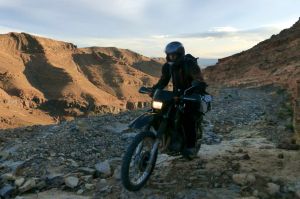 But just as it was for me back in 1982, first time rides to North Africa can be an adventure, sure, but also a shambles. I came back from that trip having leaned a lot but not seen or done half as much as I could have. Today, I still read or hear of aborted rides in Morocco: hassles at the border, heavy bikes carrying unnecessary gear, spending unnecessarily, getting shafted or over-ambitious schedules – all while days pass by clawing your way up the learning curve. Trying to pack it all into a typical fortnight’s break ending with another 2000-mile ride home in the cooler seasons is not as much fun as it sounds.

Now I’ve led a few runs, in 2015 I’ve refined the format and am offering slightly shorter and more active seven-day tours using locally rented bikes for no more than six riders. We fly into Marrakech, pick up the bikes next day and take a short ride into a remote lodge in the Atlas mountains. From there we set off on a relaxed 1000-km tour along deserted backroads and spectacular mountain pistes.

As importantly, we use great accommodation out in the Berber homelands, enjoying their warm hospitality and freshly prepared food. The food is a real highlight of this tour and my knowledge of Morocco gained from writing the guidebook means barely a day or a mile need be wasted getting to the best places which other tourists and tours often overlook.

This tour is not a mini rally or off-roading challenge, it’s a relaxed but adventurous ride through the deserts and mountains to make the most of your time in southern Morocco on and off the bike and with the support of a group.

Sound like your sort of thing? Then read the FAQs.

Up to the Test…

Shuttling to and fro to get the bikes

Lunch on the road

Coming down the Timouka Pass

Up to the Tizi 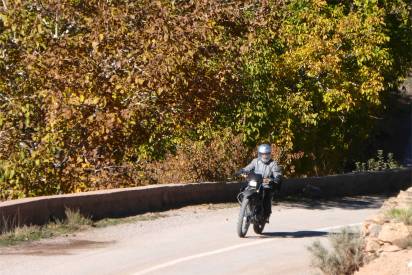 … and down the other side

Fly in, hop on a bike, head for the High Atlas

On the road to Agdz

and the ride back to Ozt and Marra 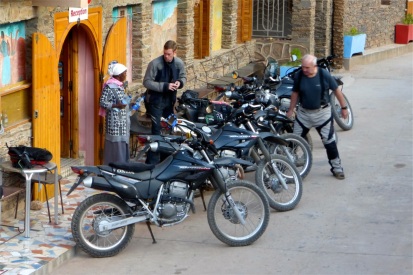