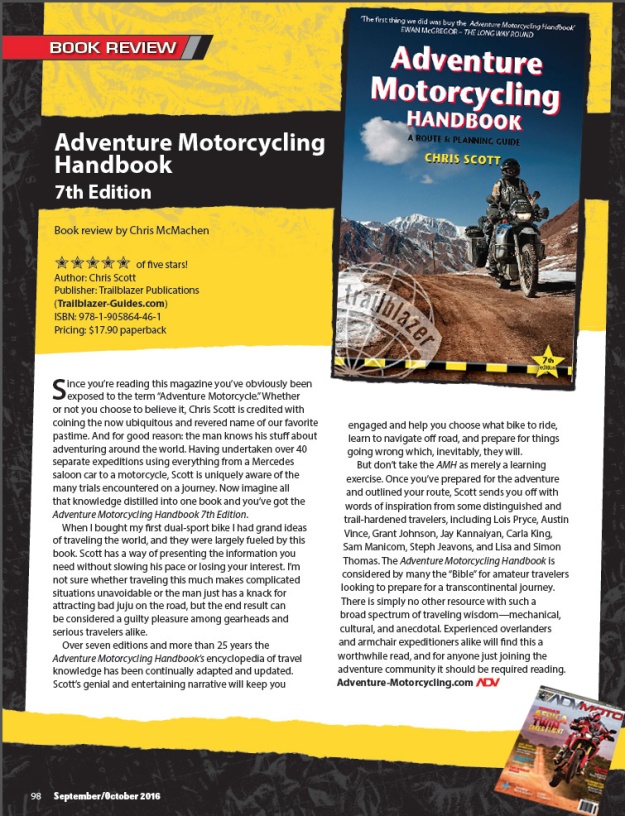 Fortunately, I had Chris Scott’s indispensable Adventure Motorcycling Handbook up my sleeve, which clearly outlines the unwritten rules.

…This is the first book I bought several years ago when trip planning for Morocco… the ‘Bikers’ Bible’ … basically all you need to know about adventuring by bike in one book.

[AMH6] … is legendary. Put simply it is the reference book for overland travel. The amount of … information crammed into its 385 pages is staggering… [and] crucially it’s written and complied in an easy-to-digest manner and there’s a vein of dry humour running through it too…
If you’re planning an overland adventure the AMH should be on your checklist right next to ‘motorcycle’ and ‘passport’ … and at 15.99 it’s one of the best value pieces of overland kit available.

[AMH6] … should be on every adventurer’s bookshelf, even if you intend just to visit a foreign country for a holiday. Whether you are a beginner or an experienced traveller, I consider it vital reading for anyone contemplating an overland adventure.

… the 6th edition of the Adventure Motorcycling Handbook can now officially be called a “classic” [and]… contains a huge amount of useful information for nimrods like me. Although even six editions still haven’t convinced me to consider taking off on a worldwide adventure myself, it’s a good armchair read, packed with tips that may also help your local backwoods “adventure”…
If you are considering a cross-border motorcycle adventure, I can think of no other book I’d recommend first. Full review.

this prescient guy on Adv Rider thought “… [AMH6] is just about the most most comprehensive travel books I have ever read.”

Scott Brady at Expedition Portal in the US gives his PoV on the new edition of AMH: ‘… a gritty, honest, hard won review of what actually works and what you really need to ride a motorcycle overland…’ ‘definitive guide to preparing for a round-the-world expedition…’
[November 2012]

Paddy Tyson at Overland Mag has this to say “… Chris Scott has managed to pull it off yet again, producing something which could have been as dull as dishwater, but which is in fact a real page-turner... This is one of those must-have books, not least because, like me, if you had an older edition, you’ve worn it out.” Full review here.
[November 2012]

London Bikers have this to say about AMH6: “…  I defy anyone not to have a plan, or the urge to plan, once you reach the back cover … The book’s secret is how information is presented to you … AMH presents hardly a paragraph without some anecdote or example from Chris’s massive databank of personal experiences [and] relevant notes from other experienced travellers.
London Bikers score: 19/20 because it simply leaves no obvious stone unturned“. Full review here.

Amazon reviews are coming though: “… tells what only an expert can … with a refinement and sense of humour worthy of note. It makes all the difference.” DMM.

‘Even if you have a well worn copy of the last edition, it’s worth upgrading to the latest …  AMH. Tons of new material and the same solid format that made this book great in the first place.’ FG.