A Moment on a Triumph 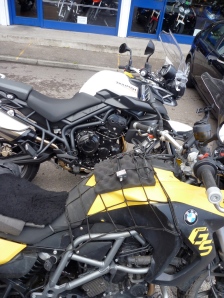 I popped into Carl Rosners on the way back from Portsmouth to ask for a quick spin on a Triumph Tiger 800 – the non XC one which compares to the F650GS SE I was riding back from Morocco. I was curious to try out Triumph’s competitor to the twin BMs.

Outside the new Explorer 1200 had just been lowered from a crane and I chatted with a recurrent GS owner who’d was on his sixth Boxer but had just taken an Explorer out for a spin. I was told later he fitted the typical profile of potential Explorer buyers.

Inside, I expected to have to negotiate with the dour guy – possibly Carl himself – who I recognised from the late 1970s when I used to come to Rosners to get my ever-ailing T140 Bonnie seen to. I was upfront and said I wasn’t going to be buying a Tiger but wanted to make a quick comparison with the BM. I don’t know if that’s cheeky but whatever, I’d

caught him on a good day. That day’s MCN (right) had the headline ‘Is It All Over For The GS’, followed by a beaky bike giant test in which the Triumph Explorer had come out tops against a Multistrada, Stelvio, GS-A, Versys, Crosstourer, Super Ten and KTM 990. The testing ‘adventure’ MCN had set themselves – one of the ‘biggest, most involved and most thorough’ in MCN’s history? A three-day ride to Glencoe way up in Scotland. From Peterborough. Well I suppose Mongolia was asking too much.

Anyway, bloke in the shop had already sold well over a dozen Explorers in the fortnight they’d been out and expected to shift plenty more. He did ask, so I mentioned AMH, but he looked like he’d not heard of it. However Tiger quick spin? Certainly Sir, here are the keys. 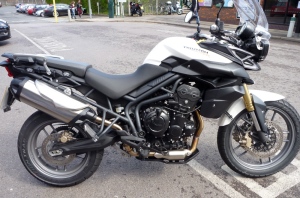 Some things I knew about the triple Tiger 800: it was heavier than the GS but probably not that much more than mine with the extras, more powerful by 33% and as a result, less economical.

I didn’t get a chance to put that last fact to the test and I won’t pretend that this 20-minute burn up around London’s outer suburban sprawl is any sort of  comprehensive equivalent to my month on the BM, but this is what struck me.

Another stonking engine! But one that like a multi, urges you to wring its neck – the opposite of the BMW. Not sure I’ve ever ridden a triple before although the XS850 had been on my wish list at one time in the early 80s. I was surprised how smooth the 800 was, proper four-cylinder smooth. Not much throttle yanking you can do in a 30mph zone with schoolkids on their hols, so I darted around discretely while eyeing yet more storm clouds which seemed to have tracked me over from Spain.

Odd sensation in the handling, it seems to sort of steer itself with lean rather than turning the bars, some technical attribute of the steering geometry that I can’t define. You lean and it turns for you – odd but probably good once you get used to it. The BM is a little lighter and jittery.

The 800 comes with a thick, full-height screen, similar to the Metal Mule I had on the GS, but apart from the digital speedo readout, the digital dashboard was less easy to interpret, featuring small figures for the gear indicator and other stuff. Suspension seemed as firm as the GS, though you’d imagine it’s more sophisticated, and brakes are doubles up front which you’d want with nearly 100hp and a free pass to bury the needle. At one point I had the semi-legitimate excuse to overtake a slow moving lorry up hill – holy moly you’d not get that sort of rush from the 650GS! Gear change was slick on the near-new chain, but who knows if the seat would go the distance.

Chatting with the GS owner before I set off, we agreed that Triumphs seem to have a top-heavy look – especially the triples – which may belie the actual riding impression. He’d noticed the weight of the 260-kilo Explorer over his GS12 which was some 40kg lighter. Maybe all the triple-cylinder cam drive gubbins up there lends that impression. It felt the same with the Tiger 800 and great though it was to blast around on it, my suspicion was that it would have been hard work on Moroccan pistes and tight backroads, if not a real blast getting there.

That in itself defines the current popularity of adventure motorcycles don’t you think: looking like you could ride the Earth’s far-flung, ragged roads while actually owning a really fun street bike where the vast majority of owners ride, no matter what their aspirations.

So BMW F650GS less exciting than the Tiger 800 squirt-rocket, but better mpg and probably easier to manage on the dirt, which still makes it an all-round, real world adventurer to me.

Still, as an old Triumph owner – my first proper bike – it’s great to see the Hinckley firm competing so successfully on a global stage. Triumph have earned a cool cachet that no other surviving marque can claim, one that goes right back to the Sixties when they were the bike to be seen on (Tamborine Man, left). And interestingly, a mini readers’ poll in my red-hot MCN rated them as the ‘best quality bike brand’ only just behind Honda and way ahead of BMW, Ducati and Yamaha. Can it be true, a British-built Triumph comparable in quality to a Honda?
Back in the shop I asked the guy if the Steve McQ Scrambler I mentioned here was in yet. No – any day soon and but were all pre-sold too and could have sold more. Whatever they’re on in Hinckley, it’s great to see a home-grown manufacturing success story.